As we live through these very strange times, the urge to blog and the urge to weave seems to have deserted me for quite a while.  Maybe it’s just what was happening in my life – once we came out of lock down at the end of October last year, work was very busy and then I had a family member staying with me for a few days each week until March.

There actually has been some weaving happening – I finished the tea towels based on Stubenitsky. With a natural cotton warp, I’d used the darkest yarns in the stash to give the best contrast.  I ended up with a rather dark and dull pile of tea towels, the nicest thing I could say about them was they looked as though they’d been woven during a pandemic. 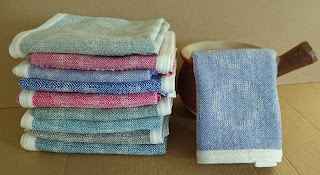 I decided that the next warp needed to be brighter so I pulled out the brighter cones of cotton and designed my version of #728 from Carol Strickler’s book.  Apart from hemming them on the wrong side, they turned out well and now even the hems are fixed. 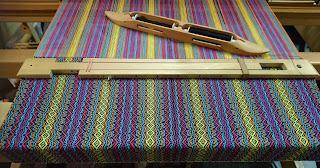 And the ‘dog on the loom’? – still waiting for inspiration.

Then I remembered that I’d entered a piece in the Complex Weavers exhibition in Canberra, postponed from last year.  I finally found my notes and realised that I was going to attempt something on my 4 unit drawloom.  I needed lots more of the long eyed and long heddles.  I tied all the heddles, 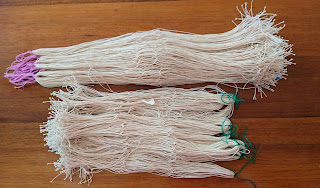 changed the shafts, set everything up for the drawloom, made the warp, threaded it through both sets of heddles and realised that I had almost zero shed and that the side I could see was the wrong side.  I knew that there would be many many mistakes with such a small shed and that it was time for Plan B.  Plan B was much the same design but done in Summer and Winter.  So I took all the extra heddles off the loom and put the normal ones back and, as I couldn’t find the original email with the dates, emailed the organiser.  Turned out that I had just over a week before my entry was due but somehow It was done in time, with I think about 3 minutes to spare.

Here’s the wrap. The theme of the exhibition was Cartography of Cloth and I had been spinning a wool and silk braid from Moseley Park in shades of coral and magenta with some black and white as well.  It reminded me of the various colours of red wine from Merlot to Shiraz and my entry became Map of the Vineyard.  I used Zephyr as the warp, a fine wool yarn for the tabby weft and the handspun, plied with plum reeled silk, as the pattern weft. If you look carefully, you might see the gate into the vineyard at the bottom, the long rows of vines and the roses at the ends of the ends of the rows to indicate the grape varieties.

Although we have few cases of COVID 19 in Victoria, our health officials want to keep it that way and as soon as a few cases appear we’re back in lockdown, usually just for a couple of weeks.  I think at the moment we’re in our fourth for 2021 and it’s just been extended by another 2 weeks

We went into lockdown at the end of May but it still looked as though the Sheep Show would go ahead. I wanted to make a jacket for the ‘Hand woven garment’ section but I still had enough warp left on the loom from the Complex Weavers piece, for another wrap. The Zephyr wool and silk warp was far too expensive to just cut off.  As I had a bit more time because of lock down, and enough of the handspun for another wrap, I decided that I would use the left over warp for another entry.  I played around with the weaving software, thinking I would be able to come up with something that looked like tiles.  As I experimented, the tiles elongated and turned into stylised eyes.  It just happened that the theme this year was ‘Vision’, I should know a bit about that. And just like that, the design was done and I even had a title – ‘The night has a thousand eyes’.

In the right light it does look like eyes peering out of the darkness but to be honest I think I can only find 472 eyes. 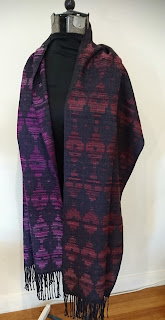 Once that was done, I still had enough time to weave fabric for the jacket and the facings.  I used 2/28 wool from Geelong Dyeing, a colour and weave draft from Robyn Spady’s Heddlecraft July/August 2020 for the main fabric and Strickler #43 for the facings. The pattern was Vogue pattern 1648 by Júlio César, a simple jacket suitable for handwoven fabric. 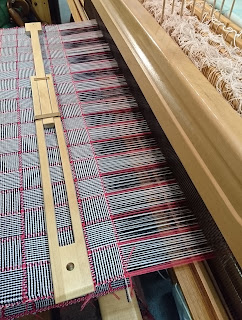 Once I finished weaving the fabric out in the cold garage, I told my 8 shaft loom that I would see it again in the Spring and went inside where it was much warmer

I rolled my yardage onto a cardboard roll, 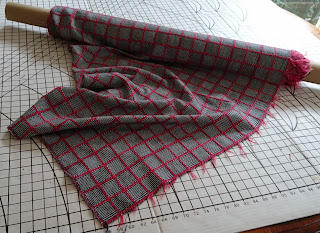 it almost looked store bought, and got on with the tailoring. 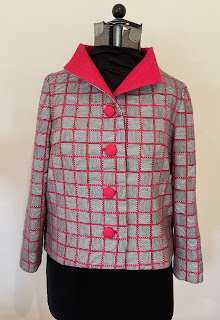 I decided that it was time to try bound buttonholes in hand woven fabric. I used plenty of iron on interfacing and Fray Check and they turned out quite well.

I delivered my entries to the Guild, they were taken to Bendigo, judged and put on display – and a few minutes after that we went into lockdown again and the entire show was cancelled.  I felt so sorry for all the people who run the Sheep Show every year. They were so close to going ahead but I heard that there were traders who took all their goodies out of their vans, set up their displays and then had to just pack them away and go home. Of course they weren't the only ones, everyone involved from the food vendors who had to throw out all the food they had, to the sheep breeders some of whom ended up stranded in Victoria along with their sheep and sheep dogs, missed out on the excitement, fun and income they get there each year.  Let's hope we can have a real Sheep Show in 2022

And the dog on the loom? Even though it was now the only loom with a warp on it, I still wasn’t inspired

We were in lockdown for the last couple of weeks of July, I got back to work for a couple of days, had my second COVID vaccination and found that night I had lost my appetite.  It wasn’t fixed by a good sleep and my stomach became sore.  I was a bit concerned about myself, went to the doctor and was promptly diagnosed with appendicitis and found myself on the way to the emergency department followed by surgery the next day.

It all happened so fast I still have a surprised look on my face. I have been assured that I am too old to have appendicitis, apparently 15 to 30 is the peak age, and that the timing relative to the injection was just an unfortunate co-incidence.  Everything went smoothly and I was home in a couple of days with a long list of dos and don’ts.  My surgeon’s nurse rang after a couple of days to check on me and to reinforce what I was meant to be doing.  Nothing strenuous or any heavy lifting for the first couple of weeks, then more exercise, perhaps an exercise bike.  That’s certainly not going to happen but it did occur to me that the effort involved with an exercise bike was probably similar to weaving on my small loom. I asked her the question and once I had explained what weaving was – she told me that I shouldn’t weave for at least 2 weeks. It was however a good opportunity to re-hem the tea towels. It made no difference to the drying qualities but I felt better once they were done.

I can’t tell you how interesting that dog on the loom became once I was told not to weave.  I’ve examined it from all angles, have decided that I will finish the first piece with the hand spun yarn.  I read somewhere that rather than having needles disappear into the middle of the pincushion, it’s better to have a separate needle cushion with loops to secure the needles on the surface so I’m planning to weave a small strip to make into ‘needle cushions’.  Then I think I will re-thread the remainder to a different overshot design and use it for a table runner.

So there you have it, a rather drastic cure for dog on the loom

Must go, my 2 weeks of not weaving finishes today and I’ve got a dog on the loom that needs some attention